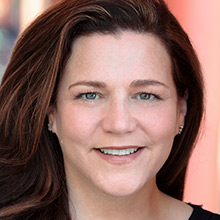 Ann Greenberg has significantly advanced the democratization of media with her work as an entrepreneur, inventor and thought leader.

Ann co-founded Gracenote, the leading entertainment data company. In 2017, Nielsen bought Gracenote and adopted it as the standard content identifier across its audience measurement solutions.

At her new company, Entertainment AI™ Ann is merging human and machine creativity to engage a new generation. Ann also owns Fanpulse® which connects fans around the world.

How Blockchain is Remaking the Media/Entertainment Business