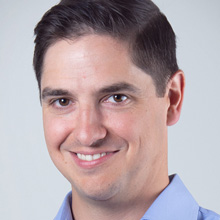 Alex earned his CFA designation in 2013 and his MBA from the Rotman School of Management.

How Blockchain is Remaking the Media/Entertainment Business