Nice geeks don’t talk about money. Or do they? Amidst the cacophony of self-driving cars, robots, audio and screens that made up CES 2020, there was a less amplified, but equally important story.

We invited some of the best minds in the financial world to The Digital Money Forum at CES 2020 to offer insights about how the tech industry should be thinking about the digital transformation of finance.

In a nutshell we found:

The crypto world is maturing thanks to companies like Gemini, Ripple, Galaxy and others that are investing in compliance and trust.

The technical obstacles that once made blockchain too slow and not scalable are being overcome.

Everyone wants to be in banking including big tech companies like Apple, Google, Facebook, Uber and even T-Mobile.

The blockchain’s best raison d’être may be in verticals like agriculture, smart contracts, real estate, shipping and manufacturing where a decentralized ledger that tracks the life of a transaction is needed.

News on the regulation front has been sparse, but blockchain and crypto companies are self-regulating, forming consortia and lobbying hard to make sure that US regulators don’t miss the ball.

How do you play in the crypto investment space? Just like Web 1.0, digital assets are worthy of investment but not without risks. We talk to a group of bullish investors who are investing in a variety of projects that all have one thing in common. They get rid of the middleman and head towards decentralization. They explain their investments in everything from land titles to voting, from banking to retail.

Companies like Devv.io, MakerDao and Ballet Crypto took to the show floor to talk about blockchain architecture. If you build it, clearly the crowds will come.

Big tech like Amazon, Apple, Facebook, Google and Uber will each have a major role in financial services over the next 5 years as banking and payments are increasingly woven seamlessly into commerce experiences. The relationship between banking and tech companies grows more intertwined and less gated as tech companies enter the arena with everything from their own payment systems and credit cards to their own employee bank branches. Are they competitors? Remains to be seen.

Nikil Lele, Director of EY, showed research suggesting that there will be a shift in banking dynamics. And the shift will very much be a function of trust. Who do you trust with your dollars? Personalization, transparency and the ability to customize services will be the major differentiators.  EY believes that tech and AI will work mano a mano offering new services including financial health analytics, personalized services and banking as a service.

HSBC announced a partnership with Google to offer real-time translation services at its branches using Google’s Interpreter mode in its Home Assistant.

Jeremy Balkin, Director of Innovation for the bank, was also instrumental in using Pepper, a robot from Softbank, in the bank branches to interact with customers and gather information to serve them better.

Danny Tomsett of Uneeq demoed an uncannily realistic avatar intended to serve as your personal banker. According to Uneeq, its avatars put the “human” back in “humanoid”.

Wave Financial’s Kirk Simpson announced a suite of personal finance tools expressly created to appeal to the gig-worker or companies smaller than 10 people. Having been acquired by H&R Block certainly lowers his cost of acquisition. Could he be Quicken for the gig worker?

Will Graylin, CEO of OV loop, demonstrated a completely conversational transactional service that can seamlessly move from chat to payment using a hands-free natural language interface. Graylin calls it “WeChat for the US.”.

Challenger banks including Revolut and N26 announced their foray into the banking world, rethinking from the ground up how to provide a digital-first bank environment. BankMobile’s Jay Sidhu explained Banking as a Service. As the bank behind T-Mobile’s bank, Sidhu observed that every college dorm or work campus is a potential bank.

Michael J. Casey, Editorial Director of Coindesk emceed the proceedings and summarized it the importance of this conversation best:

“As 2020 begins, we confront the most important technological disruption of modern times: that of money itself. With China fiat digital currency and the Facebook-initiated Libra project both on the horizon, the ideas spawned by Bitcoin in 2009 have taken on a new urgency. “

Dante Disparte, Vice Chairman of the Libra Association, the group that Facebook chose to hang its hat on with its Libra cryptocurrency, carefully explained the difference between BitCoin and the newly founded Libra. “Bitcoin as an asset class has proven that mathematical scarcity can support an incredibly exciting asset.” Disparate added, “It’s not a means of payment. It just isn’t.” Unlike Bitcoin, Libra would have a stable value, as it would be backed by some of the world’s largest fiat currencies.”

But of course the discussion got a bit heated when we invited Amy James of OpenProtocol and Akin Sawyerr of Decred to offer their commentary. Sawyerr said it was doubtful that a group of self-interested companies including Facebook could really add much to a decentralized world. Amy James of Open Index Protocol asked a more fundamental question. What Kind of Internet Do You Want? Check out James’ depiction of a next-gen truly decentralized Internet. 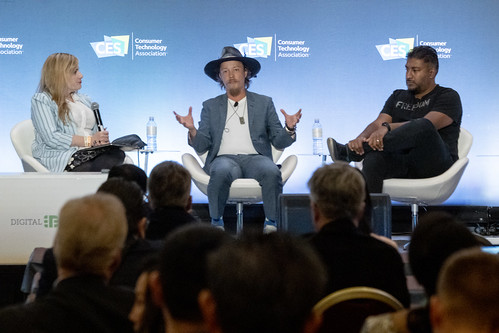 Think Vint Cerf or Tim Berners Lee meets money! The pioneers of the show: Brock Pierce, Vinny Lingham and Michael Terpin regaled the audience with untold stories of the early days of crypto when anti-establishment fervor, a deep bro-culture and genuine rethinking of a stored value of currency was king.

Pioneers made way for the new kids in town where mainstream adoption is the name of the game. A new generation of crypto/blockchain-based companies is paying attention to what will resonate with traditional investment markets.

Represented by IBM, Galaxy and Gemini (yes, the Gemini started by the Winklevoss brothers who’s early spat with Mark Zuckerberg may have portended Facebook’s use of the name Libra.) the panel debated the merits of permissioned vs. permissionless systems, why open systems need to thrive and how governance, says IBM’s Nitin Gaur needs to be a team sport.

Kat Sullivan of Galaxy, a digital asset management fund, reinforced the importance of due diligence if crypto investments are going to take root. Galaxy, she said, has rigid diligence processes for every asset class. That means investments in crypto should be backed by institutional-grade products and services for custody, audit, tax, legal, fund administration, and regulated price discovery in addition to clear regulatory and tax guidance. (galaxybitcoinfunds.com). Jeanine Hightower-Sellitto of Gemini concurred that 2020 would be a year of exploration for institutional investors.

In order for cryptocurrency to take hold there needs to be confidence that it is a regulated currency. US laws can be antiquated, vague and have too many stakeholders. What’s transpired is “not much and not nearly enough”.

On a panel devoted to regulatory prospects Deloitte’s Combiz Abdolrahimi pushed for a whole-of-government, Center of Excellence (CoE) approach to accelerate greater adoption and integration of blockchain and advanced technologies like artificial intelligence and 5G across government and industry to deliver on mission impact and improve services at scale. Ensuring United States leadership in blockchain, AI, and emerging technologies is imperative for not only achieving economic growth and inclusion, but also for our national security.”

Lisa Son Sutton, who’s running for Congress in Nevada, spoke on behalf of a new generation of financial literates, “We must elect public officials into our government who understand modern business, modern technology, and will be an advocate for blockchain. Ideal blockchain regulation is one that is supported by regulators and lawmakers embracing a modern and pro-business mindset.” Despite the company’s legendary history of compliance, Michelle Bond, Ripple’s Global Head of Government Relations, gave a sobering accounting of how expensive and labor-intensive it is for crypto companies to remain clients.

Jason Brett, CEO of Value Technology, a non-profit think tank in the distributed ledger technology (DLT) sector, worked closely with government agencies and those “inside the Beltway” to educate on all things blockchain and crypto. By the end of January, their white paper will be available for download on https://www.valuetechnology.org/. Tom Maxon of CoolBitFX announced a new product, Sygna, designed to make self-regulation and adherence to regulatory guidance easier.

To invest or not to invest, or how to invest? That is the question. It was great to put Overstock’s Jonathan Johnson, now CEO of Overstock, in the hotseat again. Bullish on blockchain, less so on BitCoin, Johnson also runs Medici Ventures, a blockchain-based investment firm. His advice? “SEC enforcement on scammy ICOs from 2017/2018 will continue in 2020 causing further chilling on altcoin trading and increased compliance with existing securities laws. The result: legitimate securities tokens will be a good way to raise capital for unique assets as the regulatory landscape catches up with the technology and a more liquid market for security tokens results.” Following up on the “don’t we all just want to get rich off of our investments” theme, Celsius’ Alex Mashinsky showed the audience the amazing returns his company is seeing by investing in cryptocurrencies as your broker. Read about the milestones his company is achieving at https://coinrivet.com/bitcoin-30k-celsius-ceo-alex-mashinsky/.

Being compliant is only the top of the Sisyphean task of launching a currency. Steven Becker of MakerDao’s was one of the early evangelists of having crypto backed by some real amount of stored value (like the US dollar) and his disciples are following. Zocial’s CEO Rick Bleszynski believes that blockchain solutions need to integrate ecommerce into a more complete system of social messaging and fintech services.

Of course the biggest obstacle to the adoption of the digital transformation of money boils down to one simple word: trust. We trusted the paper dollar enough to put God’s name on it. What will we do to gain trust in digital code? Especially when the present-day internet has shown itself as somewhat flawed on the Truth-o-meter? That’s where our privacy panel came into play. Travis Jarae of One World Identity, Bimal Gandhi of Uniken, Joe Cutler of Perkins Coie and Rob Wisniewski of Clear came on to explore the merits of everything from biometric authentication to a universally accepted digital identity standard.

What’s on the horizon for new products and offerings in 2020? A rousing show and tell with an audience vote evaluated the merits of four up and comers. Blocksafe’s StreamIoT the first blockchain-powered platform to protect and store data in your IoT devices. CPUCoin, the gig economy’s version of sharing your CPU power for coins. Temtum, a quantum powered version of a crypto exchange and Adoraboos, a system for educating future generations on topics including blockchain development, created on the blockchain. (Spoiler Alert: Adoraboos won the audience vote. ) 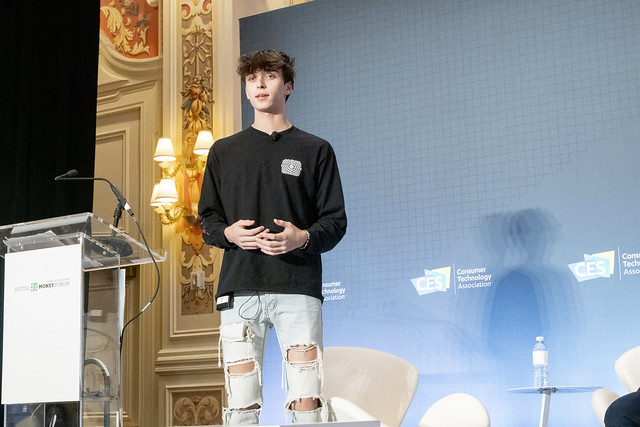 Gen Z is set to become the most important decision makers of this decade; they are the most networked and connected generation of all times. Helping mobilize them for climate change, Stan Bharti’s Gear Impact looked at climate change and the blockchain energy. His company (backed by news anchor legend, Larry King and his son, Chance King, graced our stage to issue a challenge. TikTok followers of Josh can win real cash if they can impact climate change with a video.

Chris Garrod of Conyers sponsored a global toast and a look at how other countries (not our own) have developed sensible crypto-friendly policies. Puerto Rico, China, Malta, Sweden, Germany and others were explored under the careful moderation of Mark Mueller Eberstein, Adgetec.

We will be made to decide what kind of digital currency we want: a centralized state version, a corporate version, or a decentralized currency built on an open-access, permissionless protocol. To ensure that these technologies serve society’s interests, we need a regulatory framework that doesn’t curtail the innovations needed to bring them into real, scalable deployment but that also protects the rights of the human beings he will use them.

Thanks to all our speakers and sponsors who know instinctively that it’s the marriage of tech and finance that will grow the economy.